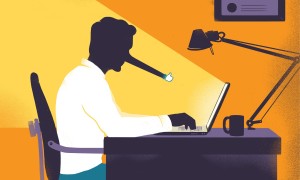 Katharine Viner, the editor-in-chief of The Guardian, posted a thought-provoking and important essay on The Long Read earlier this week, “How Technology Disrupted the Truth,” in which she ponders the recent Brexit vote, the rise of Donald Trump, our social media filters and what constitutes “news”:

A few days after the [Brexit] vote, Arron Banks, Ukip’s largest donor and the main funder of the Leave.EU campaign, told the Guardian that his side knew all along that facts would not win the day. “It was taking an American-style media approach,” said Banks. “What they said early on was ‘Facts don’t work’, and that’s it. The remain campaign featured fact, fact, fact, fact, fact. It just doesn’t work. You have got to connect with people emotionally. It’s the Trump success.”

Viner sees this as emblematic of a much broader struggle that occurs every day when more people than ever are getting their news from social media:

Now, we are caught in a series of confusing battles between opposing forces: between truth and falsehood, fact and rumour, kindness and cruelty; between the few and the many, the connected and the alienated; between the open platform of the web as its architects envisioned it and the gated enclosures of Facebook and other social networks; between an informed public and a misguided mob.

What is common to these struggles – and what makes their resolution an urgent matter – is that they all involve the diminishing status of truth. This does not mean that there are no truths. It simply means, as this year has made very clear, that we cannot agree on what those truths are, and when there is no consensus about the truth and no way to achieve it, chaos soon follows.

What she describes is not a passing trend. She cites the contention of Emily Bell, the director of the Tow Centre for Digital Journalism at Columbia University, that “Our news ecosystem has changed more dramatically in the past five years than perhaps at any time in the past 500.” And she laments the decision by many journalistic enterprises to go after “junk-food news.”

The cynicism of this approach was expressed most nakedly by Neetzan Zimmerman, formerly employed by Gawker as a specialist in high-traffic viral stories. “Nowadays it’s not important if a story’s real,” he said in 2014. “The only thing that really matters is whether people click on it.” Facts, he suggested, are over; they are a relic from the age of the printing press, when readers had no choice. He continued: “If a person is not sharing a news story, it is, at its core, not news.”

Yet Viner is not without hope. She is merciless in examining the problematic business model of news publishers and is not romantic about the “old days” of news, chronicling many missteps that needed correcting. Yet she concludes:

I believe that a strong journalistic culture is worth fighting for. So is a business model that serves and rewards media organisations that put the search for truth at the heart of everything – building an informed, active public that scrutinises the powerful, not an ill-informed, reactionary gang that attacks the vulnerable. Traditional news values must be embraced and celebrated: reporting, verifying, gathering together eyewitness statements, making a serious attempt to discover what really happened.

This is a #longread worthy of your attention and time.