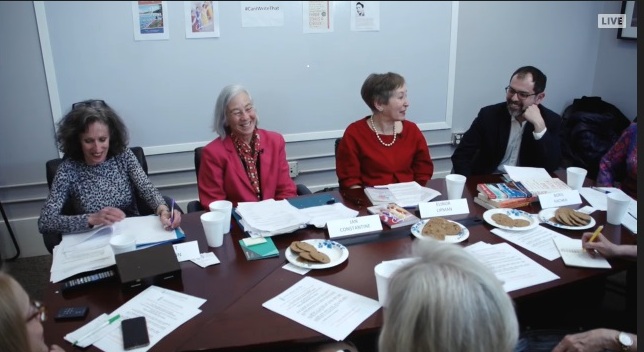 From left: Bridget Marmion, Jan Constantine, Elinor Lipman, and Boris Kachka discuss CAN I WRITE THAT WHILE THEY’RE STILL ALIVE?, a Conference Room Confab hosted by Your Expert Nation on March 2, 2016.

CAN I WRITE THAT WHILE THEY’RE STILL ALIVE?

In this 90-minute video two notable authors, Elinor Lipman and Boris Kachka, along with Jan Constantine, general counsel for The Authors Guild, join YEN president Bridget Marion to discuss the rules and protocol every author who writes about living persons should know. You’ll learn the differences between defamation, libel, slander, invasion of privacy and how to avoid each; the concerns, and some suggested solutions, when it’s your own life and family you’re writing about;  what “rules” novelist, bloggers and publicists must keep in mind; and what you really need to know about fair use. The video is in the MP4 format, has a file size of 422 MB, and is available for download (but not online viewing) immediately upon purchase.

BORIS KACHKA is the author of Hothouse: The Art of Survival and the Survival of Art at America’s Most Celebrated Publishing House, Farrar, Straus & Giroux and a longtime contributing editor at New York magazine.

ELINOR LIPMAN, best known for her ten novels, including The Inn at Lake Devine, is also the author of an essay collection, and a book of rhyming political tweets. Two of her essays have been New York Times “Modern Love” columns, and more than a dozen have been published in the Boston Globe’s “Coupling” and “Connections” columns.

JAN CONSTANTINE has been General Counsel for The Authors Guild, a non-profit organization representing a membership of over 8,500 published authors and freelancers, since 2005. Previously, Ms. Constantine was Executive Vice President of News Corporation and, prior to that, Deputy General Counsel for Macmillan, Inc.

BRIDGET MARMION, Panel Moderator, spent over a decade each at Farrar Straus Giroux, Random House and Houghton Mifflin, mostly as SVP, Marketing. In 2012, she launched YOUR EXPERT NATION, Inc., a full-service marketing firm.