“Late Night With Seth Meyers” has become a haven for writers, particularly novelists, with the host welcoming more than a dozen authors in the past year. Mr. Meyers has interviewed Joshua Ferris and Marlon James as well as seasoned best-sellers like George R.R. Martin and Stephen King.

For years, book publicists found unexpected allies on Comedy Central, as late-night hosts Jon Stewart and Stephen Colbert made a point of interviewing authors, injecting humor into serious subjects such as science and economics. But neither embraced fiction, which hasn’t had a TV champion since Oprah Winfrey started her book club and turned dozens of novels into blockbusters. 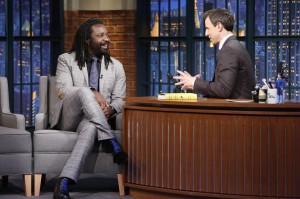