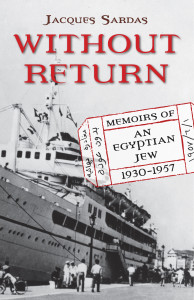 An inspiring story of finding hope in frightening times, of exodus and determination, and of timeless questions shared among generations

“What a journey! Without Return is essential reading for anyone as fascinated as I am by the lost world of Alexandrian Jews, remembered here and evoked in poignant detail.” —Gini Alhadeff, author of The Sun at Midday: Tales of a Mediterranean Family

“Without Return provides an essential addition to the mosaic of experiences surrounding the exile of Jews from Egypt following the Suez Crisis. A family story of challenge and redemption, it is also a profoundly human story that illuminates the valiance and resilience of the human spirit.” —Jean Naggar, author of Sipping from the Nile

An inspiring story about a Sephardic Jew’s life In Egypt during the last years in which Jews, Muslims, and Christians lived peacefully side by side—and the determination that drove his immigration to the United States and his rise to a successful business career

In the early 1950s, a nationalistic fervor swept Egypt and escalated into prejudice and violence against Jews, forcing many to flee. By 1956, following the Suez Crisis, the situation had become so difficult that Jacques Sardas and his family realized that for their safety, they, too, must leave the Egypt they loved. Facing uncertainty but determined to secure a comfortable future, the man who would eventually become president of Goodyear’s worldwide tire division set off for a distant continent with a gut-wrenching stamp on his passport—Moughadra nihaëya bedoun awda: “Departure definitive, without return.” Jacques and others like him—people who were considered “foreign,” or apatrides (stateless), even though they had been born in Egypt—could never see their homeland again. By 1967, the Six-Day War would result in the final exodus of any remaining Jews from Egypt—coexistence just a memory.

Without Return begins in 1930, when Jacques is born in Alexandria, Egypt, the youngest of four children. His parents—whose roots stretch back to Izmir, Turkey, and the Greek island of Crete—followed Jewish traditions but also incorporated aspects of Middle Eastern culture into their daily lives. Jacques’s family was conversant in several languages, including French, Arabic, Hebrew, Greek, and Ladino. Although family ties were strong, money was scarce, and the Sardases were very poor—at times desperately so. Jacques’s father sold fabrics from door to door, and business was unsteady. As a young man, Jacques struggled, often bitter and angry over his lot in life. But he refused to accept that he was destined to live in the same economic caste into which he was born. His determination to break the mold became a driving force throughout his life, as did the inner strength that came from his mother’s belief in him.

When Jacques was ten years old, following his mother’s unexpected death, the family moved to Cairo. After high school, he held a variety of jobs and was a member of the Maccabi basketball team that won the Egyptian national championship in 1956. That same year, Jacques married Esther Pesso, whose family had roots in Greece and Yugoslavia and whose maternal grandparents, aunts, and uncles had all been killed in the Holocaust. Following the wave of anti-Semitism that swept Egypt, most of Jacques’s family fled to Israel. Jacques and Esther opted to try their luck in Brazil, the country that had accepted them as refugees. So before their first anniversary, he and Esther, who was pregnant with their first child, boarded the steamship Achilleus, bound for Genoa, and there boarded the Cabo de Buena Esperanza, bound for the port city of Santos and from there to São Paulo. Shortly after their arrival—with no knowledge of Portuguese or English and housed in a barely habitable refugee camp—Jacques landed a job at a bank and subsequently was hired at Goodyear, where he would remain for the next thirty-three years.

At Goodyear, without benefit of a college education, his determination paid off, and he rose from file clerk to sales manager. He was then transferred to Paris, where he rose from sales director to president of Goodyear France. After his transfer to Akron, Ohio, Jacques ultimately became second in command of the entire corporation. During his tenure there he initiated and spearheaded the development of the Aquatred tire. After leaving Goodyear in 1991, Jacques became CEO of two other manufacturing companies—Sudbury, Inc., based in Cleveland, and Dal-Tile, based in Dallas. Both companies had been teetering on the brink of bankruptcy, but Jacques was able to turn them around so that their employees and shareholders realized financial gains that were once deemed out of reach. Jacques’s story—of an immigrant to these shores, born in poverty, who not only achieved his goals but also positively affected the lives of others—resonates especially strongly today.

Without Return speaks to anyone who has ever felt like an outsider. It testifies eloquently to the common humanity that unites us and offers an evocative journey into a world where people of all colors, races, faiths, and nationalities once lived together in peace. It also reminds us that determination and hard work are the keys to success in any endeavor. Above all, Without Return is an engrossing personal history that encourages readers to discover their own family stories and draw strength from the generations that came before them. 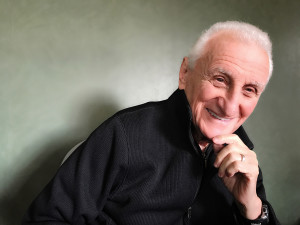 Jacques Sardas lives in Dallas with his wife of sixty years. They enjoy spending time with their four daughters and eight grandchildren. He is donating his proceeds from the sale of Without Return to the Jewish Federation of Greater Dallas.

Read more about Without Return on the book’s website.

Without Return: Memoirs of an Egyptian Jew 1930–1957
By Jacques Sardas